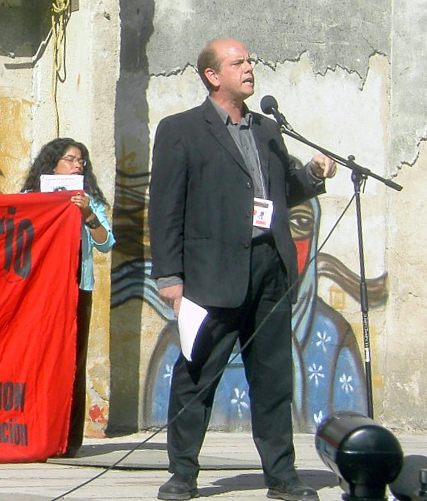 To the General Membership of Unión del Barrio,
To the Mexican People,
To our Allies,
To all Friends of the Liberation Struggle for Nuestra América,

It is with great pain and a heavy heart that Unión del Barrio informs the Raza Liberation Movement and its supporters that we have lost a leader of our struggle. Pablo Aceves, a leading member of Unión del Barrio whose combative spirit would inspire all generations of unionistas, lost his last fight to a sudden medical emergency.

Pablo committed 31 years of his life to the organization and to the movimiento he loved so dearly. He made his raised fist and booming voice unmistakable elements at every political event he attended. He was a person of unwavering political principles, and an uncompromisingly dedicated fighter on the side of the poor, the exploited, and the oppressed the world over.

Pablo was an important political force within Unión del Barrio. At the time of his passing, he was the longest actively serving member within the organization. Over the years he fulfilled multiple roles, most notably as a member of the Central Committee. He was currently fulfilling the role of Political Secretary of Base Celia Sánchez.

Pablo’s spirit of struggle motivated movement people, and he advanced the struggle for raza self-determination and liberation everyday. He never relented, even until his last day. Suffering from severe chest pain while at work Friday morning, compañero Pablo passed away at 1:04 am Saturday morning after a long and difficult surgical procedure failed to stop his internal bleeding. Pablo was 50 years old.

At the time of his passing, Pablo was surrounded by family, friends, and comrades. He will be terribly missed within the ranks of Unión del Barrio and within our liberation struggle. But he will live on, as we honor his legacy and his contributions to the raza struggle for Self-Determination, National Liberation, and Socialism.

We intend to collectively honor comrade Pablo. As funeral arrangements are established, Unión del Barrio will announce the services.

The trial of Francisco “Chavo” Romero has ended with the court-ordered rejection of 5 citation tickets issued by the Oxnard Police Department. The “Not Guilty” verdicts are a victory for the Todo Poder al Pueblo Collective in its long-standing fight against OPD brutality and are a further confirmation of the rights of oppressed communities to fight back against police impunity, harassment, and abuse….

See Todo Poder al Pueblo Collective for the full article on the case!

Below is a copy of the letter that was mailed to me (along with 5 citations), two weeks after we had our October 13, 2013 March Against Police Brutality. As you can see, the police state that my “ACTIONS CREATED A HAZARDOUS SITUATION.”

This is fabrication and an insult to our community, the families, the organizations and participants. For the past 20 years I have been an advocate for community organization, for resistance, for exposing police brutality – THIS IS THE REAL REASON FOR TARGETING ME AND OUR COMMUNITY.

For the past year we fought in the courts to get all of the evidence, and in their own undercover surveillance it clearly shows that I was assisting in making the march as ORGANIZED AND SAFE as possible. NOT ONE SINGLE PERSON WAS HURT at the protest march. We will post picture screenshots from the videos to show how myself and other great community members assisted in keeping the march organized.

Truth is, the Oxnard Police had dozens of undercover cops following us, most likely within the march, and had nearly 100 cops staged near our march, including a BearCat Armored Carrier, plus neighboring city and county law enforcement on stand-by. The police had a manual that indicated that if the march became unsafe, they would issue a dispersal order. They never ordered or announced the dispersal order. That day, traffic units for Oxnard Police also stopped traffic along our march route. THEY SPENT NEARLY $15,000 in overtime that night of the protest.

The letter below, is signed by Senior cop Jamie Brown of the Traffic Division. He confessed in court on the stand that he did not write the letter, it was prepared for him and he signed it. He never even seen me the date of the action. The letter was written by Oxnard PD Alex Arnett – the Surveillance team director. He later also admitted in court, that what I did (i.e. assist in asking people to march safely “had to be done.” So why mail me tickets then?

The answer is simple, it is an attempt to tie us up in the courts with fines, bench warrants, all in the hopes of CRIMINALIZING US. They are doing this in attempt to intimidate and put fear in our community for standing up for gente.

The City of Oxnard, Oxnard Police Department and the District Attorney have WASTED over $20,000 in TAX PAYER MONEY to fund this POLITICAL ATTACK. They are leveling the power of the state and its resources in an attempt to SILENCE US.

OUR COMMUNITY REFUSES TO BE SILENT… So we continue to protest, expose, and organize to challenge city and police abuse.