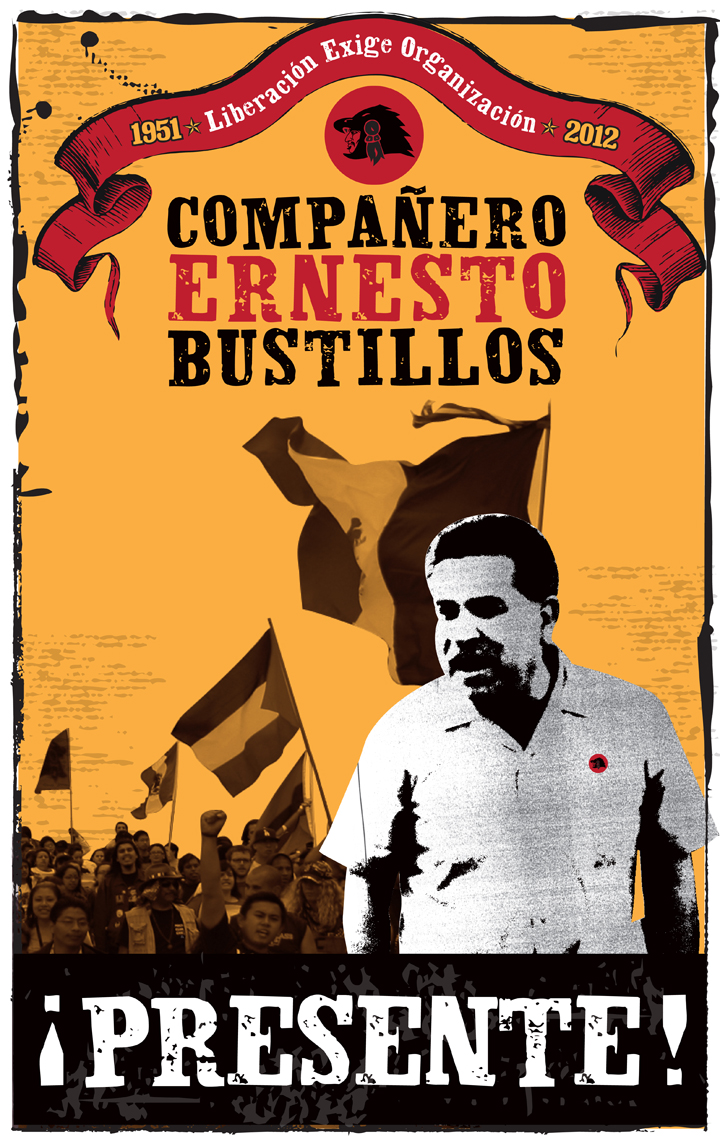 Ernesto Bustillos was raised and came of age in Barrio Logan and among the Raza working class of San Diego. From a very early age, Chairman Neto- as he came to be known beloved by his compañeros en lucha and the masses of la Raza and other oppressed people- questioned the conditions his gente lived in and understood the need for things to change.

He grew to have a deep love for his gente and for humanity, and deep hatred for injustice and oppression, which would form him into a tireless and courageous fighter for liberation. Neto came of age during the Chicano Power Period of the Sixties and Seventies, and was involved in the Brown Berets of Aztlán, was a leader in el Movimiento Estudiantíl Chicano de Aztlán (MEChA), the Chicano Park Steering Committee, and the Committee on Chicano Rights. During this time, and throughout his life, he was noted for his tenacity in fighting oppression and his humility among the masses.

After years of struggle and confrontation with the system, at a time when the movimiento had suffered serious defeats and repression at the hands of the colonial system, Ernesto and a core of veterano activists formed Union del Barrio on August 29th, 1981, at the height of the Reagan era and the resurgence of Colonial White Power in the World. The vision of Chairman Neto and the others who founded Union del Barrio was that of a multi-issue organization; an organization of organizers who could struggle for unity in every barrio, against police and migra terror, for Chicano studies from Preschool to the Universities, and could organize the masses of Chicano Mexicanos-La Raza to struggle for National Liberation and the socialist reunification of México, north and south of the Imperialist imposed border. This was the tireless vision that kept Ernesto Bustillos going to the very last conscious moment of his life.

Chairman Neto was central to virtually all areas of the organization and his vision guided our cadre from a small organization to the vision of a dedicated cadre of revolutionaries ready to take on the system in every arena of struggle. In addition to the countless marchas, pickets, teach-ins, forums, and other events he organized and directed and (equally important) indirect victories he was central to, he was central to the re-founding of La Verdad newspaper and La Verdad Publications, the Chicano Press Association (now know as the Raza Press and Media Association), the re-establishment of Guerrilleros de la Pluma, the Chicano Mexicano Prison Project, Association of Raza Educators, Somos Raza, Concilio of Chicano Studies, and countless other projects that have shaped the face of the struggle not only for Raza in San Diego, north and south of the imposed border, and all over the world. Whether he was in Barrio Logan, La Habana, Atoyac, Caracas, Guatemala City or Amsterdam, Chairman Neto humbly brought forward in a way that anyone could understand, what the struggle for Raza Liberation meant, in the context of the struggle against capitalism, colonialism, and imperialism.

Ernesto made many theoretical contributions and led Unión del Barrio at a time when Raza Liberation was not even a consideration for any “national group”. At a time when nationalism was supposed to be past, Unión del Barrio under his leadership along with la Raza Unida Party and the Movimiento de Liberación Nacional was central to putting Revolutionary Nationalism- with a class analysis- in Aztlán, connected with the struggles in the rest of México and the Américas, and place Raza Liberation, back on the front burner.

He led a relentless struggle against neo-colonialism (sell out politics) and white left opportunism as a way to bring clarity on the priority of our people’s struggle for Raza self-determination. He was always on the cutting edge of theoretical development on the politics of Revolutionary Nationalism and the Revolutionary theory for Raza Liberation-striking the balance of being critical without being sectarian, and building a unity based on principles, while build the space to struggle with other organizations.

It was within that framework that Ernesto central in the founding of the National Chicano Moratorium Committee, the Raza Rights Coalition, more recently the Save Our Barrio’s Coalition. But most importantly, the building of a Vanguard Revolutionary Party that can one day lead the liberation struggle towards a thousand victories, with a final victory of a Reunified Socialist México, with workers and peasants in power.

Through it all, Ernesto pushed himself and those around him to think critically, be self-critical, to strive to study and work at all times, and to have liberation as the foremost thing on our minds always. He taught us that sacrifice and discipline are essential when struggling and that there are no excuses for not advancing our stuggle. He always put the masses before himself and always showed the strongest of moral and indeed physical courage not only by not backing down from a fight, but never backing down from THE FIGHT.

Indeed, right up until he was too weak to continue, he was emailing and analyzing the essential questions of our times, whether it was the state of the movimiento, the organization, or the issue of gentrification and migra terror, the comrade’s analysis remained as sharp and his commitment to Revolution remained strong, even when his body was not up to the task, his spirit continued to be that of a warrior for liberation.

It would be hard to sum up all the things the compañero left us, but he leaves us with the understanding that courage and humility go hand in hand. He leaves us with the understanding that there are no excuses and that the highest expression of love and humanity is to struggle for our own liberation from gringo settler colonialism, and capitalism, and that by liberating our gente, we are contributing to the liberation of all humanity. He gave and will continue to give true meaning to the phrase coined by the great Guerrillero Lucio Cabanas Barrientos: Ser Pueblo, Hacer Pueblo, y Estar con el Pueblo.

Ernesto Bustillos and his legacy will continue to live within us and within all Raza and oppressed people within and outside the belly of the beast who will not accept slavery and who will accept nothing less that total freedom.